I was excited to learned that pasture could sequester as much carbon as forest, and I have been on farms where it is happening. My first career was in horticulture, but the prospect of building soil carbon in pasture seemed simpler, as growing food, especially vegetables, often involves carbon destroying practices, such as rotary hoeing.

So I was delighted to learn from John Kempf. He outlines how crops, even for example strawberries, can sequester carbon. His two top strategies for building plant and soil health are enhancing photosynthesis and innoculating the soil biome.

Its all about photosynthesis!

Notice how the energy of the sun generates five times more sugar at 60% photosynthesis for roots and the soil. It is transported to roots and soil via what Christine Jones calls the “liquid carbon pathway”. This reverses conventional wisdom – rather than building the soil to support health plants, healthy plants build healthy soil.

In addition to building soil, the abundant supplies of sugars build plant health. When plants have plenty of sugars they convert them to lipids (fats) therefore boosting their reserves and immunity. 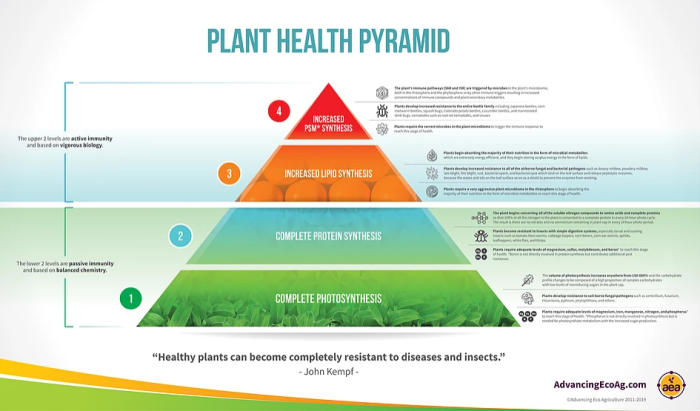 Improved immunity increases as the plant’s health grows in four levels as outlined in figure 1.

How do you achieve increased photosynthetic rates?

Table 2: foliar application rates (from the University of Delaware)

Foliar application is tricky. The iron and magnesium have to be chelated and the minerals used should not reduce. If you are serious about trying this, I suggest contacting John’s company, Advancing Eco Agriculture.

I am trialing foliar sprays in my home garden. My property is quite shady in the winter, so I hope that enhancing photosynthesis will increase sugars in winter fruits and help to reduce the pest and disease burden further.

Here is one of John’s many videos – this one is long, but a good place to start.